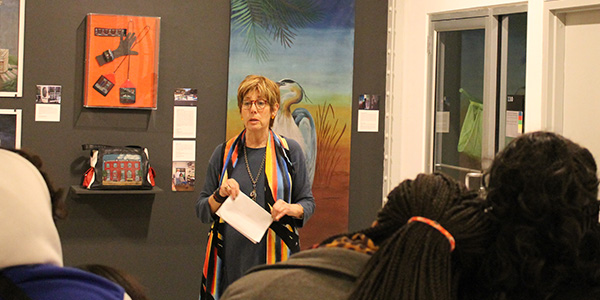 Passing on a Baltimorean art tradition

The recent Young Audiences artist-in-residence at the Baltimore Design School was one of those serendipitous and wonderful coincidences you don’t often come across. John Iampieri, a member of the Painted Screen Society who we’ve been working with for a number of years, has taught all over Maryland through his work with Young Audiences. When he announced that there was going to be a residency at the school, it was like all of our dreams come true!

The Painted Screen Society has been involved in residencies since the society began in 1985 for the purpose of keeping rowhouse arts alive in Baltimore. The whole idea behind the society is to get the art form into the hands of people who are more likely to carry it on or would benefit from knowledge of the indigenous tradition. Nothing could be more useful than to maintain it in the hands of Baltimore students who are being schooled to be artistic in some way.

I wanted to make sure that the students working with John would get the full experience of the history of painted screens, so they came to MICA, and together we toured the recent exhibit, Picture Windows: The Painted Screens of Baltimore and Beyond (Meyerhoff Gallery, December 13, 2013 to March 16, 2014), which was a three-dimensional embodiment of everything in my book, “The Painted Screens of Baltimore: An Urban Folk Art Revealed,” and focused on passing the tradition on. The students also saw the documentary film “The Screen Painters” and got to see the painters in action. They learned that painted screens were not just meant to be beautiful, but were also a practical innovation, used in private homes to discourage individuals from seeing into windows while still allowing those inside to see out. I wanted students to understand that this is something that is relevant to their lives and their environments, because this is a Baltimorean art form–born here, created here, consumed here, and beloved here for many years.

Anybody who is able to get one more person to understand the value of painted screens in his or her own community is important, but John just happens to be an incredibly organized, thoughtful, and patient teacher. He has the right combination of creative ideas because he thinks in terms of the group working together as opposed to individuals creating single products.

John thinks beyond the screen. He isn’t thinking merely about putting an image on your window; he’s thinking about images that can be adapted to all sorts of applications, and the fact that he thinks big, in terms of banners and murals, brings him right into the intersection of the new breed of screen painters and the whole digital evolution. His approach allows many hands to collaborate to make large screens that can have a variety of installations. With his help, the students at the Baltimore Design School came together with a single purpose, which produced really impressive results that they can be proud of.

What was really important throughout the project was that the students realized that everything was up to them. They chose the subjects and the teams. They then learned about design, color, and new materials they never would have heard of. They were also learning to work as a group. Learning to do something in a prescribed manner sometimes trumps being an independent artist—a status they may not be ready for.

I’m hoping that, after this project, some of them say, “Wow, I can do that!” and will go home and add value to their own homes. I hope the students’ eyes have been opened to possibilities they didn’t even know about and also to a really important traditional art that is native to their city, one that couldn’t be more relevant to the rowhouses they live in and the lives that they lead. I’m hoping that connections were made and that one day they’ll say, “I remember that.” I hope they some will keep the tradition alive, because without people who know and value them, traditions do not endure.

Part of the beauty of this art form is that there’s always been an ebb and a flow. Painted screens have been everywhere and nowhere in the course of a hundred years, and my sense is that they’ll be back, and they’ll be in another form, and let’s hope that Young Audiences continues to play a role.

Learn more about Elaine’s book, “The Painted Screens of Baltimore: An Urban Folk Art Revealed,” and how to purchase a copy online .