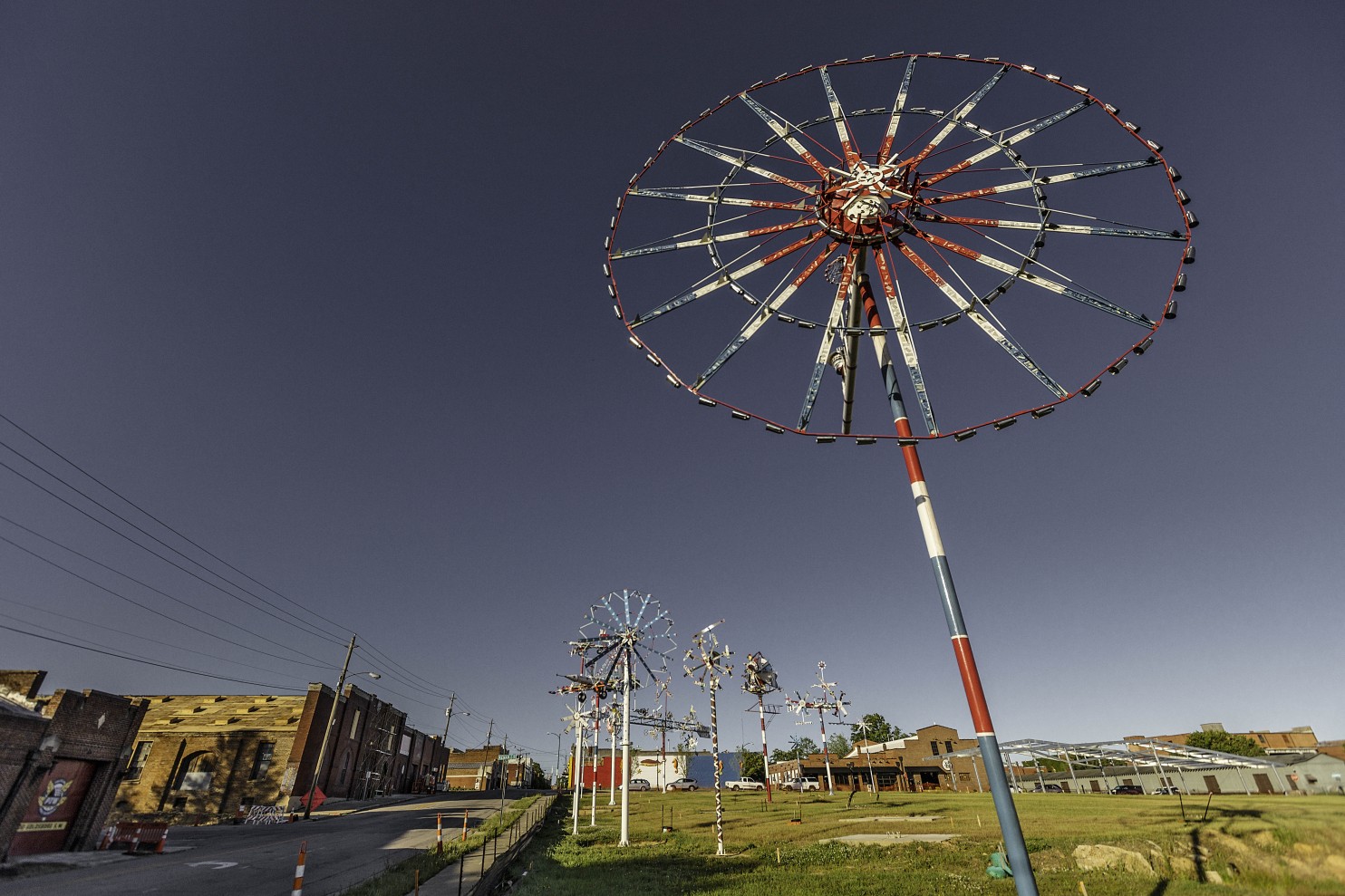 With all the talk of entirely eliminating funding for organizations such as the National Endowment for the Arts (NEA) from the federal budget, a recent Washington Post Magazine article caught my attention. The June 11, 2017 issue featured a boldly colored cover and the caption, “Is Arts Funding Essential or Wasteful? We traveled the country to find out.”

I was especially intrigued since one of the arts projects they highlighted was in Wilson, NC – where I lived as a teenager. I admit that I haven’t been back in many years, but I had heard from friends that the town had fallen on hard times as tobacco warehouses (once the backbone of the economy) closed down.

The article opened with the development of Whirligig Park, which is dedicated to the artwork created by Vollis Simpson, who fashioned giant whirligigs out of scrap metal that he collected from his day job of transporting houses and heavy machinery. Before his death in 2013, Simpson had gained quite a following; the man and his artwork had been featured in publications that range from The New York Times, USA Today, The Washington Post, and the Smithsonian Magazine, among many.

As I read the Post article, it highlighted how the NEA had been “an early believer in the civic power of Simpson’s creations.” With the help of the organization and its grants, locals also began seeing the possibilities – to draw tourists and their dollars to Wilson – and skeptics gradually became believers. People who had originally viewed Simpson’s whirligigs as junk now began to see how the arts could help revitalize a moribund downtown.

But just as all politics is local, so too are the arts.  You focus on where you live.  With that in mind, a quick check of the NEA web site revealed that in the Fall of 2016, 19 grants, totaling $520,000, were awarded to a variety of Maryland arts groups. And while these groups range widely in mission and artistic focus, two things stood out:  1) how many of these groups reach out with the arts to educate and 2) these NEA grants create much-needed jobs.

Under the education category, award recipients include the Baltimore Symphony Orchestra’s OrchKids program, which provides Baltimore City Public School students with a music and mentorship program; Wide Angle Youth Media, Inc., which teaches students how to share their voices through media arts education; The National Association of Black Storytellers, Inc., whose Adopt-A-Teller Program places African American storytellers in schools for performances and workshops to share and preserve the rich heritage of the African Oral Tradition; Arts on the Block (AOB) who provides teens in and around Montgomery County real-world work experiences through the arts; and World Arts Focus in Mount Rainier, for a program developed improve the health, identity, and independence of teenagers and adults with autism, Down syndrome, cerebral palsy, or other disabilities through dance.

Over the years NEA support has made it possible for Young Audiences to reach children in every county in our state and has provided consistent support for teaching artist training, ensuring that our programs are not only accessible and affordable to underserved students, but are of high quality and enhance the curriculum of our schools.

What about the job creation category?  Here are a few thoughts on the economic impact of the arts in our communities.

So what lesson can we take from all this? I think it is simply that the arts do matter – a lot.  The arts help create and maintain vibrant community ties, which in turn translates into real economic impact. Before the Post Magazine article caught my eye, I had read an article in the April 2017 issue of Our State, Celebrating North Carolina. I read about 217 Brew Works, which opened last November, hmm, across the street from Whirligig Park.  Tourists certainly enjoy the proximity of the brewery to the park, but more importantly, locals are the true economic boosters – coming down to talk, to relax and to enjoy their community’s new meeting spot.

It’s also worth noting that when the arts are supported, great synergies are created. For example the Our State article ended with, “another developer has moved forward with plans to create Whirligig Station – apartments, restaurants, and some office space – in an empty red-brick tobacco warehouse on another edge of the park.”

Far from being an unnecessary frill as some critics of the NEA portray it, what is readily apparent is how many small communities discovered an economic lifeline from the grants that the NEA provides. The closed factory, the shuttered mill, the abandoned plant are sadly a fact of life in too many small towns.   But as many of them have discovered, there are opportunities here as well. Who knows what might happen in your community when you combine artistic vision, a good beer, and an NEA grant?