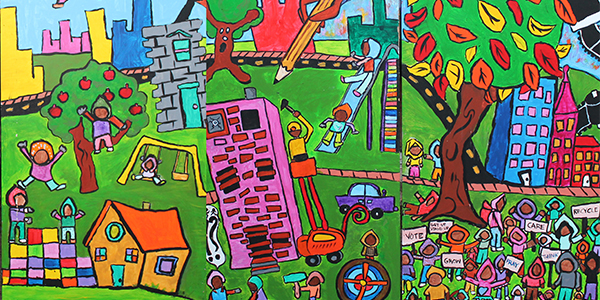 One voice, one love, one heart! Do you think there is a difference between listening and hearing? One of my professors once asked me to illustrate Jimmy Hendrix’s song “Voodoo Child.” The project made me see art in a new light. I don’t think I’ve ever had to listen to lyrics as hard as I did to really hear Jimmy. After hitting repeat over and over again, I finally heard Jimmy and realized the power of his music. I realized that music has the power to unite us by telling stories that we can all identify with and illustrating themes of what it means to be human.

This summer I worked with Baltimore City middle school students at Rognel Heights as a part of Young Audiences’ partnership with Baltimore City Public Schools Summer Academies which brought Young Audiences artists to 10 sites throughout the city. In the mornings I partnered with the
sixth-grade science teacher to incorporate arts integration with the summer science curriculum, and each afternoon my mural painting class was one of the choices offered to students for arts enrichment.

Summer programming is a valuable resource for Baltimore City students. Many Baltimore neighborhoods are deprived and neglected. Many lack basic necessities, such as access to fresh groceries or safe places for children to play and the community to gather, preventing individuals and families from thriving. Challenges related to gun violence, poverty, public health, and family structure are obstacles for students in these communities to remain focused and committed to their education. These challenges can also make summer the scariest time of the year for students in the inner city. Without a regular school schedule, these children lack access to school lunches, a safe place to spend the day, and activities that keep them intellectually engaged.

My goal for the summer learning program was to show my students how music combined with a public work of art can play an important role in restoring a community’s broken spirit. I wanted to encourage them to uplift each other through the powerful lyrics and positive messages that we shared during our mural project.

To guide the project, I selected a series of songs that spoke to community concerns. We started with one of my favorite songs of all time, Lauryn Hill’s “Everything is Everything.” I began by demonstrating how illustrators turn words into pictures. We illustrated the chorus together and then students had the chance to pick a verse of the song that painted the clearest picture in their mind and illustrate it.

Next was Cat Stevens’ “Where Do the Children Play?” which introduced students to creating depth in settings. The environmental references in this song are so profound and led to deep discussions about the physical conditions of our communities. I talked with students about using public spaces to promote a cause or message and how music and art combined can move a community to action.

The next songs on the soundtrack were Bob Marley’s “Get Up Stand Up” and “One Love.” Imagine the vibe in the classroom as we collectively realized that gun violence wasn’t just something in the news–many of us had friends or family who had been affected by gun violence. We listened to Bob’s words of peace, love, and his call for all to move to action and reflected on the social commentary of the times.

As we continued work on our mural, we began focusing on the people depicted and drawing proportions. The students wanted to create a piece with a lasting legacy that would awaken civic responsibility in all viewers of the mural.

The final 12-panel mobile mural portrayed people coming together and holding up signs that displayed community declarations. Places to play, to honor loved ones lost, and to highlight every day community heroes were interwoven throughout our visual testimony.

Click on the images above to see the “A” and “B” sides of the completed mural.

We ended the project on a personal note and illustrated Emily King’s, song “Walk in My Shoes,” because let’s face it, if we could walk in each other’s shoes we would spend less time judging, hating, and bullying others.

The students were inspired by the music and were so expressive in the images they created. They were singing along with the songs by the time we started painting. They couldn’t wait to get to my class every day and they didn’t want to leave. The work we created was magical and the five C’s–culture, comparisons, connections, communication, and community–were covered in this socially conscious endeavor. Every student was carrying their community on their shoulders and felt a civic responsibility to represent the voices of many through their art.

I could not have been happier with the outcome. The confidence of each student soared during the five-week program, and I know they will listen harder to the music they hear from now on and think about the messages that are received and sent. One voice, one love, and one heart! Let’s get together and feel all right!

See more photos of the completed mural and other photos from this summer’s arts-integrated programs!