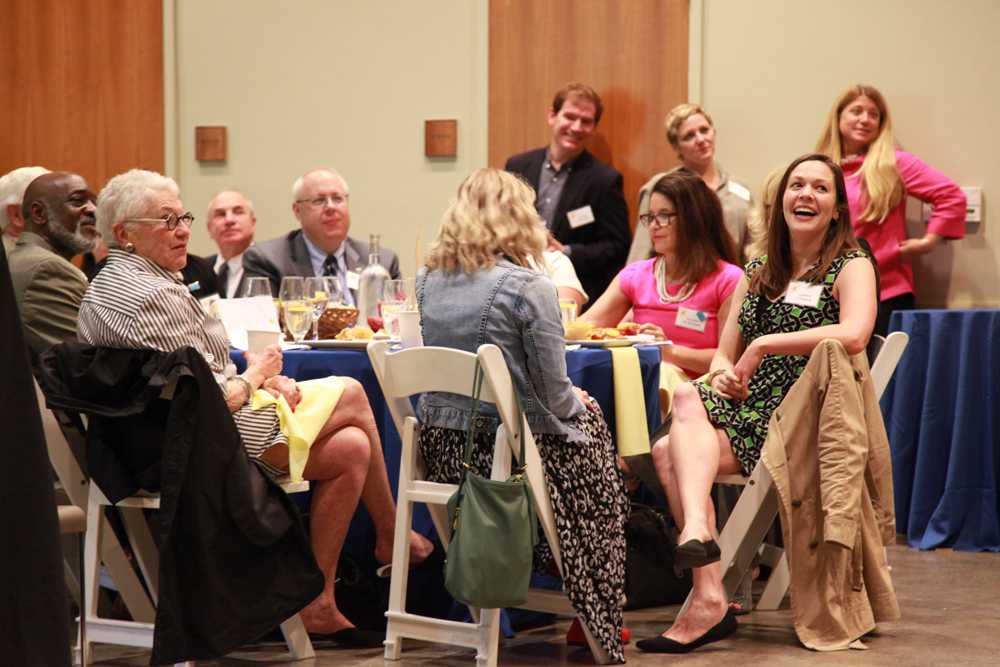 The thing I like most about Young Audiences’ Impact Breakfast is that I never know what new insight I will take away from it. Sometimes I go home and think about the things I heard and saw, and something takes root and grows from my pondering. Other years it hits me immediately with, um, impact. This year’s Impact Breakfast was of the second variety. 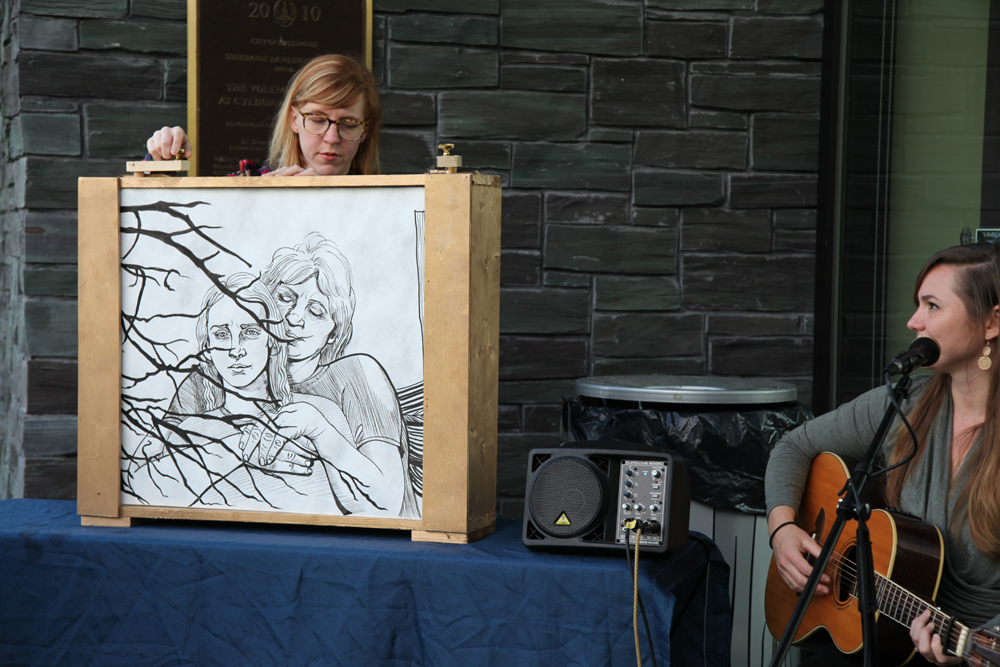 It started with the music. Because the day began with rain, award-winning Folk singer and guitarist Letitia VanSant welcomed guests with her songs in the lobby of the Vollmer Center, and not outside, like planned. She played and sang softly, setting a mood of serenity. Ahh, yes, very pleasant as I sipped my coffee. And then as I started looking at Maura Dwyer‘s handmade crankie, a wooden box containing an illustrated scroll that reveals a moving picture story as it is slowly wound by the artist, a very different style of music was unleashed–ragtime! Now that gets the blood pumping!

The guitarist’s intimate melodies were quickly drowned out. Assessing the situation–and the weather, YA staff and board members moved the duo’s entire set-up where they belonged all along–just outside, at the entrance of the building. And that improvisation really worked, as Letitia’s musical style and the moving panorama that accompanied her songs connected naturally to the park-like setting surrounding the Vollmer Center. You can’t control the weather, but you can spring into action when it changes for the better!

After listening to her a while, I wandered back into the building to take in some more ragtime and to look over the student works displayed downstairs. And that’s when one of the accompanying quotes struck me. Labeled “What Students Have to Say,” a 6th-grade improvisational theatre major stated, “My favorite major is improv because of how we can laugh and be silly. We can be anything because it is based on your imagination. In your imagination you can be anything and see anything.” Exactly! 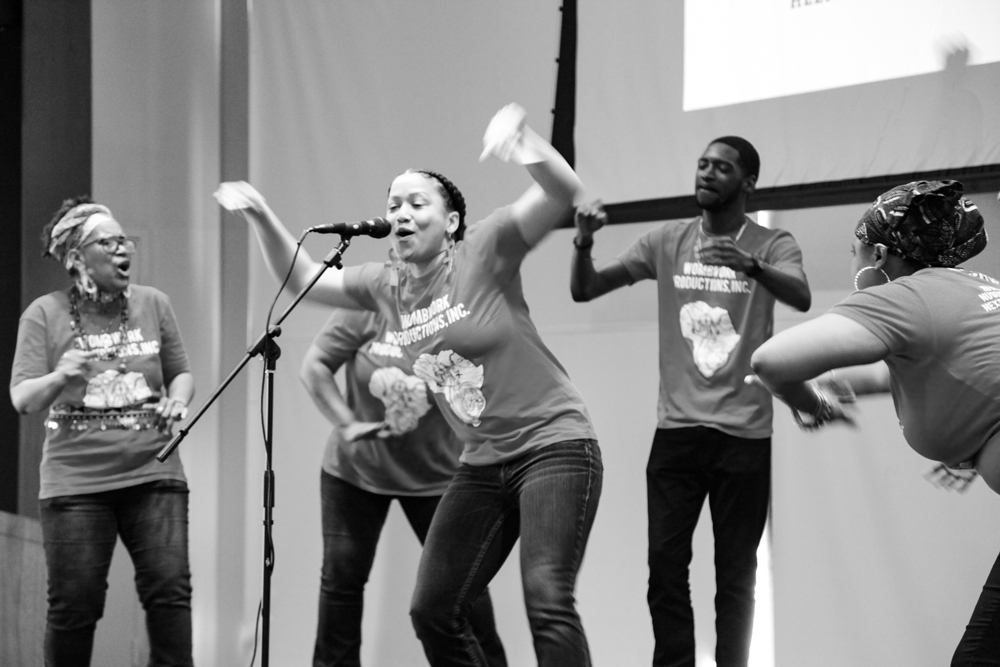 More improvisation followed as Mama Rashida and WombWork Productions performed. With Virtues as the theme and a backdrop listing a huge variety of positive qualities, she prompted the audience to participate in a call-and-response activity, shouting out “gratitude” and “unity” and “creativity” as we swayed in our seats and responded, “yeah, yeah!”

When it was time to hear Femi “The Drifish” Lawal speak, I have to admit I was particularly happy to hear from him. That’s because I have been fortunate enough to have had the opportunity to observe him in action in the classroom, at Art Crawl and at introductory “house” parties that showcase what YA does. In all of these settings, he’s a master at getting both kids and adults involved. 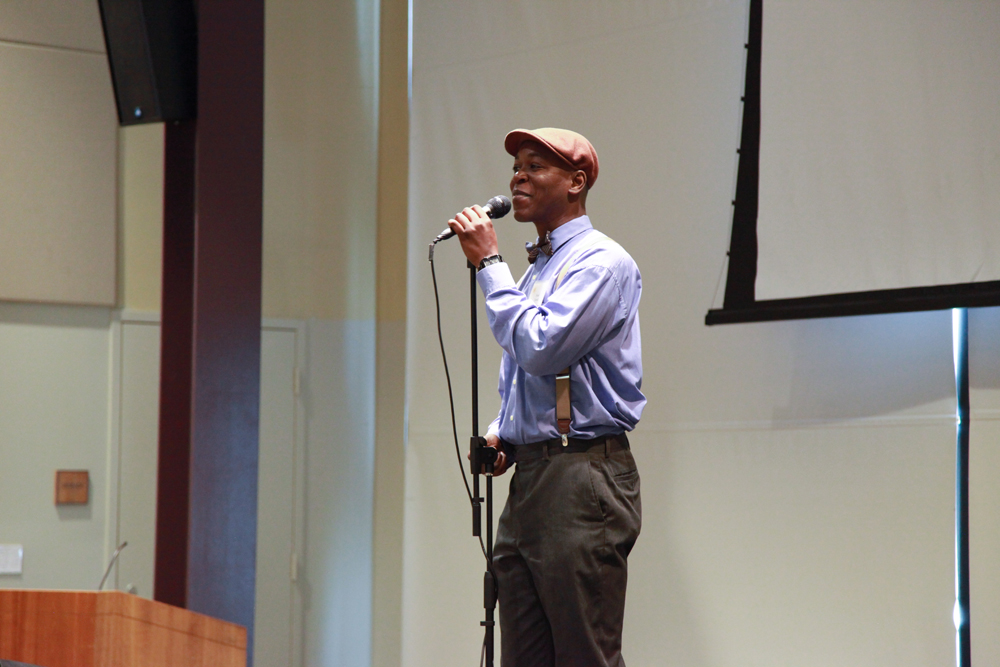 So I was both surprised and amused to hear him admit to “winging it” before he began working with Young Audiences. But what did not surprise me was to learn how his involvement with Young Audiences helped him hone and master his teaching style. He knew he was already positively impacting young lives in the classroom, but with YA’s assistance, he learned techniques that extended what he could offer and bring out in the kids. 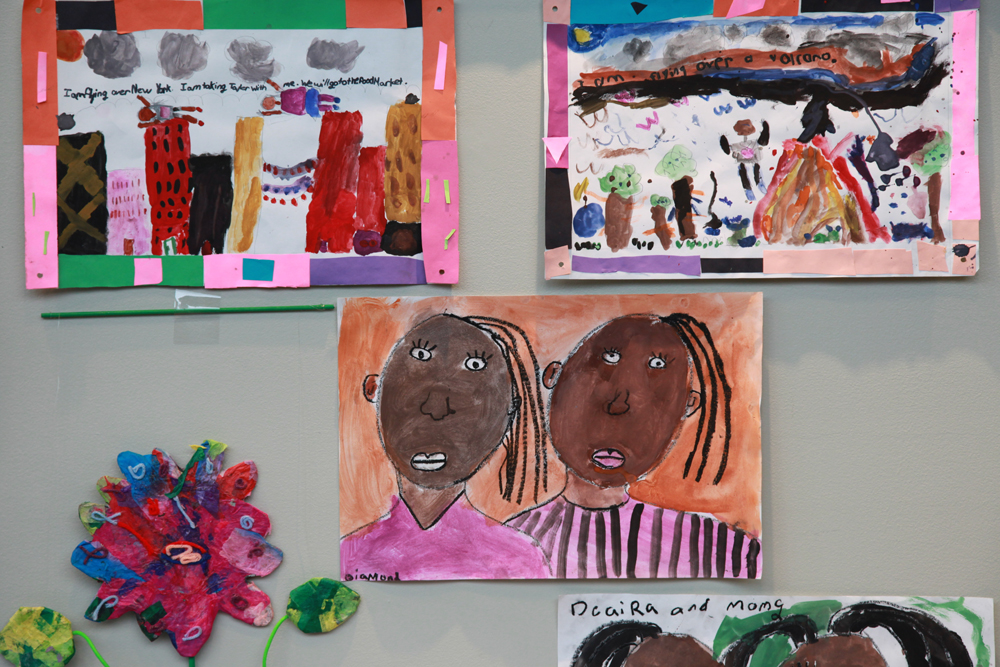 But… it is also about the preparation, oddly enough. When you prepare fertile ground for your imagination to take you places, you become increasingly comfortable with the journey, and you find new and creative ways to respond to real-world situations. When you learn classroom techniques that allow children to explore their worlds in different ways, you discover the power of improv paired with preparation. How it helps them rap their way to mathematical formulas, dance their way to literature themes and draw their way to social justice.

So at this year’s Impact Breakfast, I learned that preparing for improvisation is not quite the oxymoron it appears to be. Because no matter how prepared you are, you need to be able to improvise when the moment calls for it. And no matter how stellar you are at winging it, preparation makes it easier to soar on those improv wings.