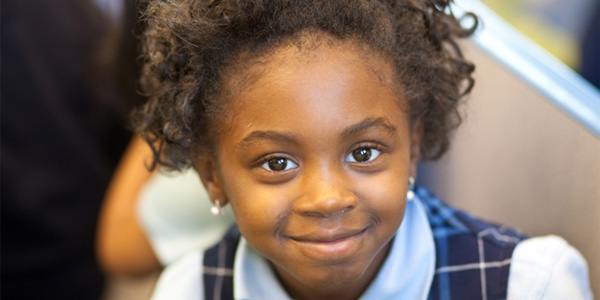 Sitting in my class each day, Nadia did well. She worked hard; she smiled. She was kind, but deferred to her third-grade classmates for academic guidance during group activities. After the first half of the school year I would not have described her as a leader. Boy, was I wrong.

Nadia’s gift spent months undercover in our classroom. It was not until the class held a talent show at our pre-spring break celebration that a brave, confident Nadia emerged. As Nadia’s group began their rehearsed dance for the audience, her dance partners—both confident learners who often directed activity in the classroom—lost track of the dance sequence. All eyes turned to Nadia, whose poise and confidence in her movements indicated to her classmates that she was the one they should look to; she was the one they should follow.

During the two years I spent teaching in Baltimore City Public Schools, my students were aware of what was out there. They knew of museums, universities, and instruments, even if they did not utilize these things in their day-to-day lives. These artistic tools and institutions–so cool at first–quickly lost their appeal when my students thought that they were inaccessible. Consistently kept at a distance, they became the enemy and symbols of what one lacked.

Nadia was fortunate to discover her connection to dance outside of the classroom, despite not having access to dance classes at her school. Nadia’s visual arts classes often consisted of coloring with crayons and pasting one color of construction paper on top of another when she was lucky—but a student’s access to the arts should not be up to luck. Artistic opportunities in school are about much more than cultivating fine motor skills and identifying artistic talent; they are about closing the gap between what students know exists, and what they have been conditioned to believe is out of their reach from years of deprivation.

Nadia and her classmates did have the opportunity to play recorders in their music class, and the pride with which they carried their recorders down the hallway let me know that these instruments were prized possessions. When my students held their own recorders, with their names attached, the arts became tangible; they began to move forward, one step, toward what they deserved. When they performed in our talent show, and were cheered on by siblings, parents, and classmates, my students nudged forward toward what they deserved. When they wrote plays, and their written words were enthusiastically acted out by their peers, read aloud and valued by others, they began to experience how the arts can create a community and boost the self-esteem of each class member. Our students deserve this community. They deserve the opportunity to try new things. They deserve positive attention for their accomplishments, and for their voices to be valued. This is all possible through the arts.

To ensure that each Maryland student has the opportunity to experience the power of the arts, Young Audiences has increased its presence in Baltimore City schools from 89 schools to 119 schools during the last four years. In 2009, we served 22,033 students; in 2013, we served 38,317. Since its launch in the winter of 2009, our Access for All Initiative has subsidized programs for students in low-income Baltimore City schools to ensure that all students have equitable access to the best artists and educational arts experiences that our state has to offer.

Inequity in access to the arts is just one manner in which many of our students from low-income backgrounds are underserved. Increased access to the arts will not solve every challenge of poverty, but it can produce empowered leaders—equipped with resiliency, creative thinking, and problem-solving skills—who are prepared to tackle future challenges. It will produce youth who have learned to value their voice because they have had the opportunity to share it with others. It will produce students who know what they deserve, and have the tools they need to put up a fight for it.

If you are interested in applying for a Spring 2014 Access for All grant to bring a Young Audiences program to your school, the application is available online here. To learn more about Access for All and our work to increase equity in arts programming, click here.